We journeyed to Derby to meet with Fatball Derby who describe themselves as just a bunch of unfit and overweight likely lads and lasses from the Derby, Leics and Notts borderlands who are not ready for walking football yet, so gather, once a week, for a game of footie and lots of  banter.

Never did a statement less describe a great bunch of men and women. Each Wednesday night they pay £5.00 to play football with all the proceeds being donated to charities. Last night Social Eyes were the recipients of a new training kit and we travelled to The Racecourse – home of the Steve Bloomer pitch – to receive the kit and play a friendly game against members of the East Midlands Pan Disability League. 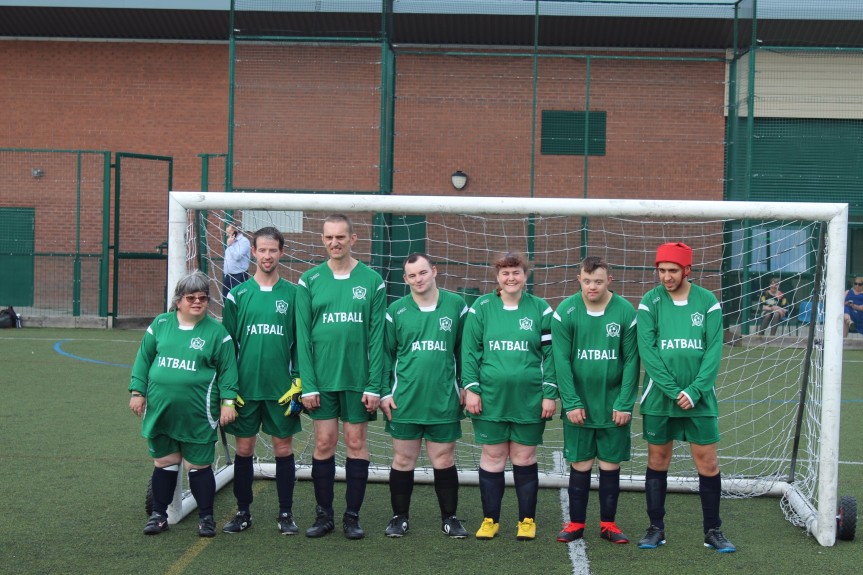 We were welcomed by Luke Barker, Ian Mason, Paul Haycock and Dave Perrin. The evening started with chip butties for all, then the unveiling of the kit and photo session.

On to a 4 X 5mins game against players from the East Midlands Pan Disability League who have numerous teams and are based in Long Eaton. The score?? was irrelevant, the camaraderie [mutual trust and friendship among people who spend a lot of time together] shown by the two teams was evident to all and both teams were given resounding encouragement and applause throughout until the end of the game.

Social Eyes youngsters are affected by various conditions, some quite severe, but their zest for life is irrepressible.

Fatball is a club for lads and lasses who are not quite ready for Walking Football yet?
They have mixed teams of all ages 🙋‍♀️🙋‍♂️ and meet:
Wednesday’s 8-9 or 9-10pm @ Racecourse Derby DE21 6AL. It costs ONLY £5 to pay and play, with no weekly commitment. The first weeks saw 22 members assemble but now one year later they have topped the 200 players. Obviously a great club with fantastic spirit and objectives.
All profits made by the club are redistributed back to charities, both local and countrywide.

Move on over to our football page and view more photos of the visit.